Dr. Vozniak is an advisory board member for Onyx Pharmaceuticals, Inc.


Multiple myeloma (MM), a B-cell malignancy in which there is an expansion and accumulation of abnormal plasma cells in the bone marrow (Dimopoulos & Terpos, 2010), accounts for 10% of all hematologic cancers. In 2013, an estimated 22,350 new cases of MM will be diagnosed and 10,710 deaths are expected in the United States (American Cancer Society [ACS], 2013; Siegel, Naishadham, & Jemal, 2012). Characteristic symptoms of MM include calcium elevation, renal insufficiency, anemia, and lytic bone lesions, commonly referred to by the mnemonic CRAB (Dimopoulos & Terpos, 2010; Raab, Podar, Breitkreutz, Richardson, & Anderson, 2009).

The survival rate for patients diagnosed with MM has significantly improved over the past decade with the development of newer treatments, but MM remains incurable (Eshaghian & Berenson, 2012). Patients with relapsed disease—especially those who have become refractory to available treatments—have a poor prognosis, with median event-free survival of 5 months and overall survival of 9 months (Kumar et al., 2012). Treatment and management of patients with relapsed and refractory (RR) MM is complicated by the symptoms of the disease as well as side effects associated with  the treatments (Laubach et al., 2011; van de Donk et al., 2011). 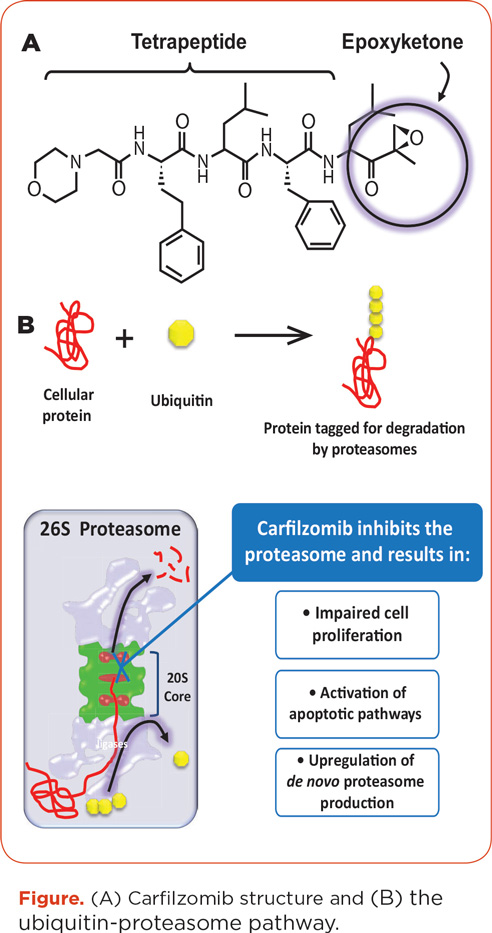 Carfilzomib is extensively metabolized into inactive metabolites (Yang et al., 2011) and has a short half-life, with the majority of drug eliminated from plasma within 30 minutes (Alsina et al., 2012; Badros et al., 2013; O’Connor et al., 2009). Carfilzomib is distributed to all tissues except the brain (Demo et al., 2007) and is largely metabolized extrahepatically, with < 1% excreted intact (Yang et al., 2011). The rapid clearance of carfilzomib may contribute to the tolerability of the drug. A drug interaction study showed that cytochrome P450 pathways play only a minor role in carfilzomib metabolism (Wang et al., 2013). Clinical studies to date have not demonstrated any need for avoidance of any concomitant medications due to drug-drug interactions (Onyx Pharmaceuticals, 2012). Both the area under the curve and maximum concentration of carfilzomib increased with increasing carfilzomib doses, but the increases were not dose-dependent (Alsina et al., 2012; O’Connor et al., 2009). Additionally, renal insufficiency does not appear to affect the pharmacokinetics of carfilzomib (Badros et al., 2013).

Carfilzomib dose is calculated based on the patient’s body surface area at baseline (treatment initiation). Patients with a body surface area of > 2.2 m2 should receive a dose based on a body surface area of 2.2 m2 (Onyx Pharmaceuticals, 2012). Dose adjustments are only necessary for weight changes > 20%. Carfilzomib is administered at a dose of 20 mg/m2 in cycle 1 and, if tolerated, should be increased to 27 mg/m2 beginning in cycle 2 and continuing in subsequent cycles. Carfilzomib is supplied in single-use vials containing 60 mg sterile lyophilized powder, which should be reconstituted with 29 mL sterile water (Onyx Pharmaceuticals, 2012). Carfilzomib is administered intravenously (IV) over 2 to 10 minutes on days 1, 2, 8, 9, 15, and 16 of a 28-day cycle. The IV catheter should be flushed with 0.9% saline or 5% dextrose solution immediately before and after administration. Carfilzomib should not be administered as a bolus.

It is recommended that patients receive proper prophylaxis prior to carfilzomib treatment. Immediately prior to carfilzomib administration, patients should receive 250 to 500 mL of normal saline or other appropriate IV fluid and should receive the same amount following administration as needed to reduce the risk of fatigue and other potential adverse events (AEs), including tumor lysis syndrome and renal toxicities (Onyx Pharmaceuticals, 2012). Additionally, prophylaxis with dexamethasone 4 mg prior to all doses in cycle 1 and during the first cycle of dose escalation to 27 mg/m2 is recommended to help reduce the risk of potential flu-like infusion-related symptoms, including dyspnea. Dexamethasone premedication can be reinstated in later cycles if symptoms develop or reappear.

Safety data for single-agent carfilzomib have been analyzed and summarized in a cross-study analysis of 526 patients with advanced MM who took part in four phase II trials: 003-A0, 003-A1, 004, and 005. In this analysis, 14.6% of patients required a dose modification or reduction, and 14.8% discontinued treatment due to an AE (Siegel et al., 2013). A summary of the most common AEs occurring in > 20% of patients receiving carfilzomib is presented in Table 1. The greatest proportion of AEs were hematologic in nature, and nonhematologic AEs were mainly grade 1 or 2 (Onyx Pharmaceuticals, 2012). In the cross-study analysis, specific groups of AEs were analyzed in detail, including hematologic, cardiac, and renal effects as well as peripheral neuropathy (PN). 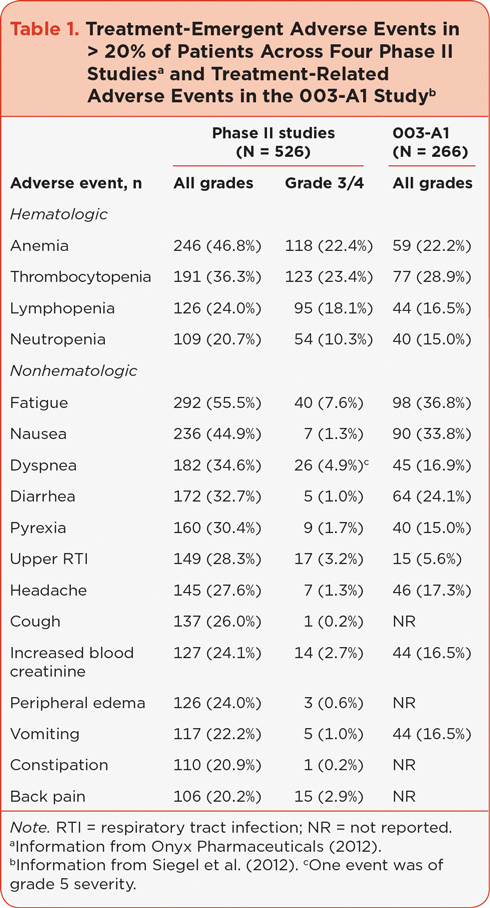 Overall, 73.6% of patients had a history of cardiovascular events; patients fit this category if they were taking ≥ 1 cardiac medication at study entry. The most common grouped cardiac AEs were cardiac arrhythmia (13.3%), cardiac failure (7.2%), and ischemic heart disease (3.4%). Dose reductions and discontinuations due to a cardiac AE were low at 1.1% and 4.4%, respectively. There were 8 (1.5%) cardiac-related deaths (all related to carfilzomib): 5 patients (1.0%) died due to a cardiac AE and an additional 3 patients had a cardiac component to their death (Lonial, Niesvisky, McCulloch, Rajangam, & Vij, 2012).

Proteasome inhibitors have been used to treat patients with RR MM for nearly 10 years; they are listed among the current National Comprehensive Cancer Network (NCCN) recommendations for MM therapy (category 1 for bortezomib), both as single-agent salvage therapy for progressive disease and in combination for primary therapy (NCCN, 2013). The NCCN’s MM Panel members classified salvage regimen options for progressive MM as either “preferred regimens” or “other regimens.” The panel classified carfilzomib as a preferred regimen based on the phase II 003-A1 study results (Anderson et al., 2013). Single-agent carfilzomib is recommended for use in patients with progressive MM who have had at least two prior therapies, including bortezomib and an immunomodulatory agent.

Carfilzomib has a tolerable safety profile and is a promising treatment option in patients with RR MM. Patients being considered for treatment should have a thorough initial assessment to provide an accurate baseline profile. In particular, a complete cardiac assessment should be performed in any patients with cardiac risk factors. Complete baseline vital signs and laboratory values are also important so that changes can be closely monitored. Patients with preexisting PN may be treated with carfilzomib, as it generally does not exacerbate PN. Patients should receive pre- and postdose hydration along with dexamethasone premedication prior to each cycle 1 dose and with the first dose of 27 mg/m2 and in subsequent cycles as needed.

Dosing modification recommendations have been established for carfilzomib and are summarized in Table 2 (Onyx Pharmaceuticals, 2012). Appropriate and frequent monitoring is important to detect AEs that may affect carfilzomib dosing. With adequate monitoring, it is generally possible to keep patients on effective carfilzomib doses, as observed with the low rates of dose modifications and discontinuations in the cross-trial safety analysis (Onyx Pharmaceuticals, 2012). The ultimate treatment goal for patients with RR MM is to be able to stay on effective carfilzomib doses while minimizing AEs and patient discomfort. 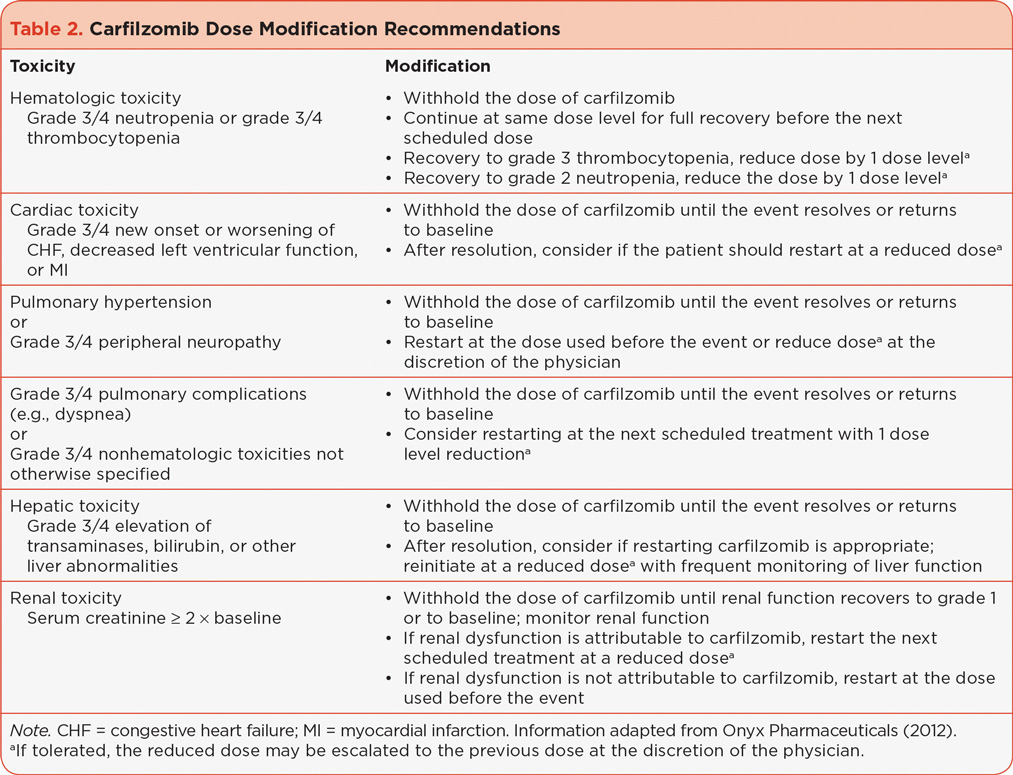 Carfilzomib is a well-tolerated therapy that has demonstrated encouraging efficacy in patients with RR MM. Because of its tolerable side effects, minimal dose modifications or interruptions are required, which allows patients with RR MM to achieve maximum benefit. Adequate prophylaxis with hydration and dexamethasone is required. Additionally, routine patient monitoring and AE management are important to maintain effective carfilzomib dosing.

The authors would like to thank Melissa Kirk, PhD (Fishawack Communications), for medical writing and editorial assistance, which was supported by Onyx Pharmaceuticals, Inc.

Dr. Vozniak is an advisory board member for Onyx Pharmaceuticals, Inc.

Bot trap - Don't go here
By continuing to browse this site you permit us and our partners to place identification cookies on your browser and agree to our use of cookies to identify you for marketing. Read our Privacy Policy to learn more.